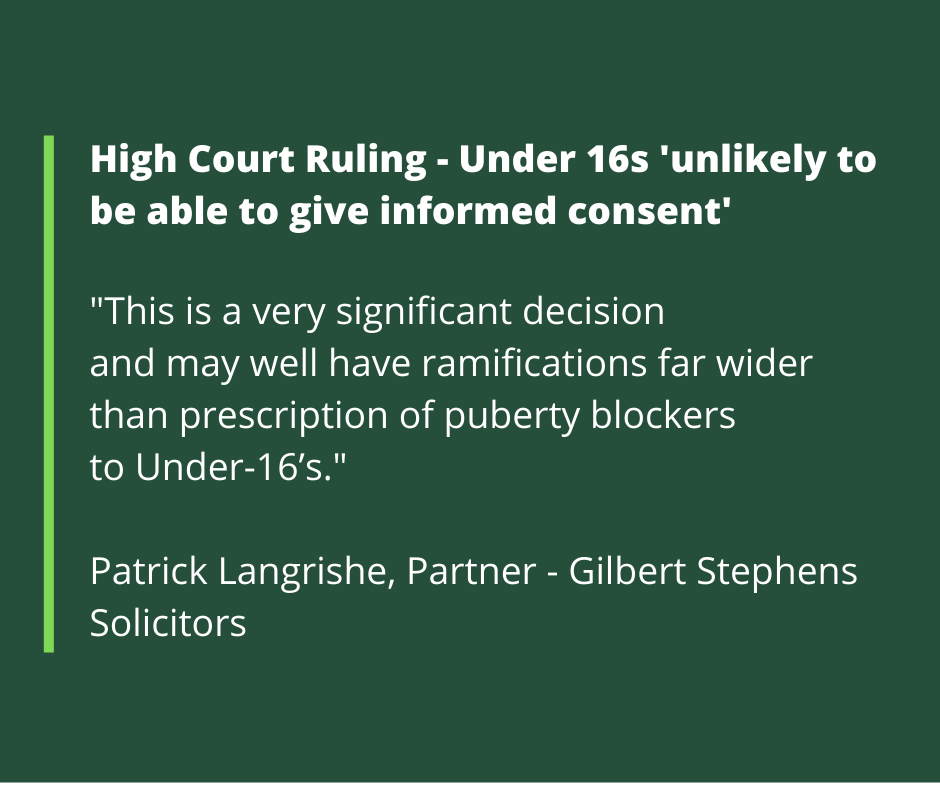 At a High Court hearing in October, judges ruled that children under 16 with gender dysphoria are unlikely to be in a position to give informed consent for the use of puberty blocking drugs.

The case was brought against the Tavistock and Portman NHS Trust by a former patient and a concerned parent. Ms Bell, the former patient, stated she did not think the Trust challenged her enough over her decision to transition to male when she was a teenager. The other Claimant, whose 15-year-old daughter was awaiting treatment, expressed concerns that the Trust could make the wrong decision.

Below we quote the judgment given by the three High Court Judges following consideration of the case. You can read the full judgment here:   https://www.judiciary.uk/wp-content/uploads/2020/12/Bell-v-Tavistock-Judgment.pdf

The Claimants’ case was that children and young persons under 18 are not competent to give consent to the administration of puberty blocking drugs. Further, they contended that the information given to those under 18 by the defendant is misleading and insufficient to ensure such children or young persons are able to give informed consent. They also contended that the absence of procedural safeguards, and the inadequacy of the information provided, results in an infringement of the rights of such children and young persons under Article 8 of the European Convention for the Protection of Human Rights and Fundamental Freedoms.

What is Gender Dysphoria?

What are puberty blockers?

Puberty blockers have been used for many years to stop precocious puberty. This is a condition experienced largely by children aged 7 or under when puberty commences at a very early age. This condition is seen more often in natal girls but sometimes in natal boys. PBs are used to stop this early onset of puberty and the use of them ceases when the child reaches an appropriate age for puberty. As can be seen from the evidence this use of PBs does not interfere with the onset of puberty at a normal biological age and, as such, will not interfere with normal development of puberty through adolescence

Puberty blocking drugs can in theory be, and have in practice been, prescribed for gender dysphoria through the services provided by the defendant to children as young as 10. It is the practice of the defendant, through Gender Identity Development Services, to require the informed consent of those children and young persons to whom such drugs are prescribed.

A child under 16 may only consent to the use of medication intended to suppress puberty where he or she is competent to understand the nature of the treatment. That includes an understanding of the immediate and long-term consequences of the treatment, the limited evidence available as to its efficacy or purpose, the fact that the vast majority of patients proceed to the use of cross-sex hormones, and its potential life changing consequences for a child. There will be enormous difficulties in a child under 16 understanding and weighing up this information and deciding whether to consent to the use of puberty blocking medication. It is highly unlikely that a child aged 13 or under would be competent to give consent to the administration of puberty blockers. Furthermore, it is doubtful that a child aged 14 or 15 would be sufficiently able to understand and weigh the long-term risks and consequences of the administration of puberty blockers to give the necessary consent to the medication.

In respect of young persons aged 16 and over, the legal position is that there is a presumption that they have the ability to consent to medical treatment. Given the long term consequences of the clinical interventions at issue in this case, and given that the treatment is as yet innovative and experimental, we recognise that clinicians may well regard these as cases where the authorisation of the court should be sought prior to commencing the clinical treatment.

Patrick Langrishe, Partner at Gilbert Stephens Solicitors said: “This is a very significant decision and may well have ramifications far wider than prescription of puberty blockers to Under-16’s. Quite apart from being a timely reminder of the issues involved when it comes to assessing the informed consent of minors, one of the consequence may be that the relevant medical authorities will have to review the procedures and guidelines which currently dictate how doctors, and others dealing with minors, should manage the situation particularly in those cases where the minor does not want a parent or other responsible adult involved in the process.”