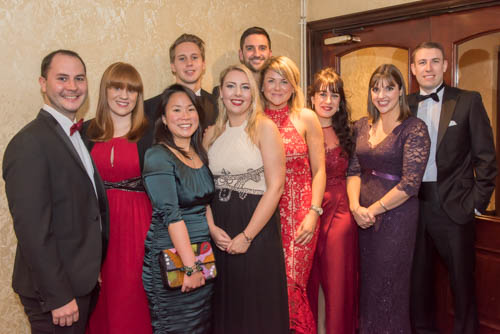 The Young Professionals Network, founded and led by Gilbert Stephens, have celebrated their relationship with Exeter YMCA at a Black-Tie dinner and dance hosted by the youth support charity.

The YPN was set up in 2010 to help Gilbert Stephens’ own younger staff in the Exeter area to build their own networks, but now has around 300 members from industry, professional services and the charity sector – including some members of the YMCA’s fundraising team who regularly attend YPN social events. The YMCA is also one of Gilbert Stephens’ chosen charities.

Given the strong ties between their organisations, the YPN saw the prestigious Black-Tie dinner at the Woodbury Park Hotel and Golf Club on October 20th as an ideal way to combine a social evening with support for the YMCA, so they booked a table for ten people.

Antonia D’Alessio, a Trainee Legal Executive at Gilbert Stephens, said:  “The YPN and Gilbert Stephens regularly participate in and attend local fundraising and awareness-raising events for the YMCA.

“Given that we are a ‘young network’ we know how important support is, and want to see young people do well.

“We visited the YMCA a few days before the dinner and it was great to see how community support goes a long way. We were told about young people they had helped through difficult times, who had recently gone to university and got jobs.

“It was lovely to see that support could really enable young people to lead a more stable life and achieve their goals. The volunteers were so friendly and helpful and the refit has made a massive impact on the young people staying there – making it really feel like a safe home.”

“The YPN are fantastic – I’m a member myself and have really enjoyed their support, both the dinner this year and last year, as well as all the other fundraising events they have taken part in i.e. the Santa Abseil!

“The Black-Tie Dinner and Dance is our biggest ‘corporate’ event and second biggest fundraising event after our sponsored sleep out in March every year. This year we had 154 confirmed guests, on six tables, and a fundraising target of £12,000, through ticket sales, the Silent & Live Auctions and one-off donations.”