Home » News » We Will Remember Them

We Will Remember Them 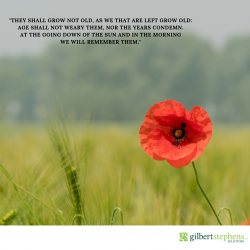 This year is the 100th anniversary of Armistice Day.

A century ago, the First World War changed the face of history and international relations as we knew it.

This formative event in our world history ended with the laying down of arms at eleven o’clock in the morning; the “eleventh hour of the eleventh day of the eleventh month” of 1918.
Following the horror of WWII, when nations across the globe again allied to fight for their freedom, Armistice Day became Remembrance Day, and we now mark this date by remembering all of the veterans and those who sacrificed themselves in all conflicts.

The laws that came from war
The effect of such catastrophic suffering and loss of life led to many changes in our society at home, and indeed in our laws.

Because so many men had gone to war during WWI – and so desperately many never returned – women took up roles that had until that time been filled by men. The first female police officers served during WWI, and the need for women in munitions factories meant that the government began to provide funds towards day care for children.

This sudden upheaval of traditional roles enabled our society to see possibilities for change that might have been expected to take many more generations.

A combination of the effort of woman’s war work and lobbying and debates about re-enfranchising men who served in the armed forces abroad, led to parliament passing the Representation of the People’s Act in 1918. This was a landslide victory in favour of granting the vote to an estimated 14 – 20 million more women and men, with parliament voting in favour to the tune of 385 to 55.
These new voting rights began a chain of events in the legal history books. By 1928, women gained an equal right to vote, regardless of their education or property, and in time this contributed to changes in education and healthcare provision.

Other interesting transformations in the law included the institution of British Summer Time. This was meant to maximise the daylight working hours, most particularly for the still vital agricultural sector. Pub opening times were restricted so as to keep the reduced workforce in order, and possession of non-prescription drugs became an offence.

Because of the security concerns regarding the war effort, press and postal censorship was introduced. At the time, the Defence of the Realm Act of 1914 was an essential move to safeguard our troops, their morale, and the success of military manoeuvres. Since then we have established an appropriate level of freedom of speech for peace time. This is formalised in the Human Rights Act 1998, allowing freedom of speech whilst still making provision for national security and public safety.

Echoes throughout the ages
The First World War was an horrific episode in our world history, and the suffering of the troops in all countries, their families, and the echoing consequences have shaped our identity and interactions as much as they have our laws.

One of the ways in which we can honour the sacrifice of all those men and women who have laid down their lives for others, is by our respectful remembrance on 11th November, at 11am.

Gilbert Stephens will be at the ceremony in Exeter’s Northernhay Gardens from 10am to pay our respects and observe the 2 minute silence.

There has been a vast array of social and political changes, some for the good, that came out of each of the wars we have experienced as a nation and globe.

There is so very much to be said on the subject, but there are some sobering words that describe the fundamental feeling of loss, and which surpass all other debate:

“They shall grow not old, as we that are left grow old:
Age shall not weary them, nor the years condemn.
At the going down of the sun and in the morning
We will remember them.”