We are happy to be supporting the latest St David’s Players’ production Iolanthe – be sure to get your tickets!

“Twenty-five years after her banishment from Fairyland for marrying a mortal, Iolanthe has been pardoned. Her son Strephon, from this illicit marriage, is in love with Phyllis and plans to marry her – but life is complicated when you’re half man, half fairy!

A warm embrace with your eternally youthful fairy mother is bound to be misconstrued by all the wrong people, with predictable results…

Follow Strephon through his negotiations with the misguided Lord Chancellor and haughty Lords as he attempts to win the hand of his true love, while his mother’s fairy friends use their magical powers to support his quest by creating havoc in the Houses of Parliament!

With satirical political comedy that’s as relevant today as it was 125 years ago, Iolanthe is a visual feast with lots of catchy songs, hilarious dialogue and a 13 piece live orchestra.”

Find out more and book your tickets here 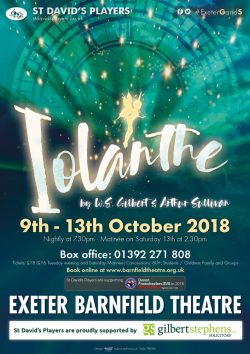