Gilbert Stephens Solicitors have strongly supported Topsham Rugby Football Club for many years and on Saturday 12th October 2019, Topsham RFC’s Men’s 1st XV team will be kicking off against South Molton, alongside the Men’s 2nd XV team who will take on local rivals Exeter Saracens. To express their gratitude for the firm’s continued support, the clubhouse has invited Gilbert Stephens to join them for the Topsham RFC VPs and Club Partners Lunch.

We can’t think of anyone better to attend than Solicitor, Head of our Conveyancing department, and rugby fanatic from our Exeter office… Martin Pratley! Let us tell you why…

Martin is undoubtably one of the biggest rugby fans across our six offices and holds some very impressive credentials. Before moving to Exeter in September 2018, Martin established quite a name for himself in the Rugby world of Colchester. He began coaching Colchester RFC U7 group through to U14 (a group to which present England star, Lewis Ludlum, belonged) whilst playing for Colchester RFC Fourth XV which he did on numerous occasions until “age related self-preservation” forced his retirement.

During his time at Colchester, Martin also qualified as a referee and was appointed Chairman of the Club’s junior and youth section which, at the time, was the largest section of its kind in the East of England. He also acted as the club’s safeguarding officer.

Martin went on to become President of Colchester RFC and became the Eastern Counties RU Safeguarding Manager, meaning that he was responsible for the safe delivery of rugby for over forty-seven clubs.

As a volunteer driver for the 2015 Rugby World Cup, Martin made his first visit to Sandy Park and drove many of the “Great and the Good” of world rugby (as well as some match officials!) including being responsible for the safe delivery of Wayne Barnes and the TMO to the final in Twickenham. Martin even got the chance to chat with Jonny Wilkinson as well as Prince Harry as part of the Kensington Palace grounds were being used as a car park for the RWC vehicles!

Martin is thoroughly looking forward to attending the Club Partners Lunch with his wife Nikki this month and will be rooting for Topsham. Martin says “rugby is a fantastic sport at every level. It teaches discipline and respect and has a fantastic social side to it as well. I have enjoyed playing, administering and coaching and I hope to become involved in the game again once Nikki and I have settled into life in Exeter”. 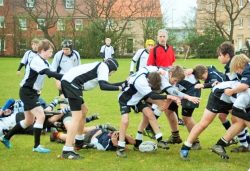