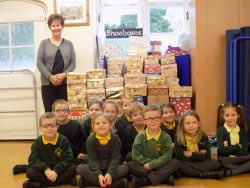 An Exeter primary school and a solicitors’ office have joined forces to bring some Christmas cheer to people in the poorest country in Europe.

Children at Kenton Primary School and staff at Gilbert Stephens Solicitors have put together dozens of festively decorated boxes of presents for those living in poverty in Moldova, formerly part of Romania.

The shoeboxes all contain basic items such as soap, toothbrushes and facecloths, warm hats and gloves, along with notebooks, pens, coloured pencils, and sweets. Boxes for children contain small toys and games.

The boxes are put together during October and November, and collected from the school by Christian Response to Eastern Europe (CR2EE), which takes them to Moldova.

Kenton Primary School has been collecting for the boxes for about 10 years. Gilbert Stephens’ Exeter office became involved seven years ago through solicitor Helen Clegg, whose older son attended the school. Gilbert Stephens decided they would like to contribute to the appeal, and joined forces with their stationery supplier Devon Commercial Stationers to provide 100 notebooks and pencil cases filled with pens and pencils. DCS provide half of the items free of charge, and Gilbert Stephens pay for the rest, with DCS supplying them at cost price.

Gilbert Stephens staff also donate all the other items needed for around 30 boxes, and deliver them to Kenton Primary School at the end of November, along with the remaining 70 packs of stationery.

Central to the Gilbert Stephens Moldova Appeal operation is office manager Julie Besley, whose office begins filling up with piles of donations from October onwards. In her own time Julie packs the 30 boxes and puts together the stationery packs, which she and Helen Clegg delivered to Kenton school on November 22nd.

Julie said, “My office gets pretty cluttered for a few weeks of the year, but I love being involved in this appeal that brings a smile to the faces of so many Moldovans at Christmas.

“Collecting the toiletries and things for the boxes has become a year-round operation for me – I see soap or something on special offer and buy it, knowing I’ll be glad I did when November comes!”

Helen Clegg said, “Julie and I get a lot of pleasure from filling these boxes knowing that they may very well be the only gift a Moldovan child receives this Christmas.”