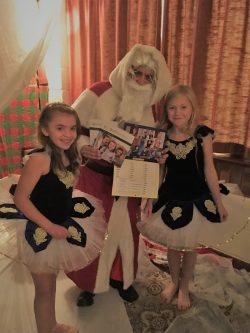 Chartered Legal Executive Tim Leat from Gilbert Stephens’ Ottery St Mary branch has revealed that he has another part-time job in December – as Father Christmas.

Tim took on the role of Santa at Kilmington Primary School’s Christmas fayre and his daughter Matilda was one of his two fairies, along with her friend Maisie.

Gilbert Stephens has also supported the primary school by taking advertising in its Parents, Teachers and Friends Association calendar, which is sold to raise funding for the school. For each month’s page, the calendar features photos of pupils with birthdays in that month. The December page of this year’s calendar, being held up by Tim/Santa in the photo, shows Matilda dressed as a Christmas star.