A challenge from an influential committee of MPs to government plans to up the limit for small claims was today welcomed by the Law Society of England and Wales.

Responding to the justice select committee report on proposed reforms to the personal injury sector Law Society deputy vice-president Simon Davis said: “We’ve been saying for a long time the changes will mean people injured through no fault of their own will struggle to get justice.

“It is a mistake to equate the value of a case with its complexity and to conclude that representation in so called ‘small claims’ cases is not needed. We are pleased the committee clearly recognises and shares the Law Society’s concerns.

“It is reassuring that the committee has drawn attention to the attempts by the government to portray the reforms as a bid to reduce the cost of motor insurance by tackling questionable whiplash claims.

“The committee took the view that government claims of savings to be passed from insurers to consumers ‘may be over-optimistic’, given the lack of robust evidence and the unenforceable nature of promises to reduce premiums.

In our submission to the select committee we outlined the extensive steps that can be required in low-value personal injury claims. We have set out an illustration of some of the issues a claimant might face when bringing a claim without proper legal representation. 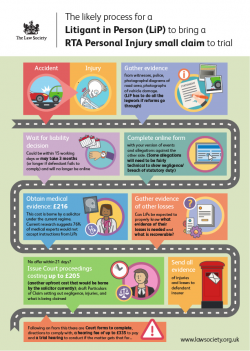