Gloria! A concert of seasonal music

The Exeter Bach Choir are set to offer a concert of music on Saturday, December 18th at St David’s Church, Exeter.  The event is scheduled to start at 7:30 p.m and will feature a variety of seasonal works, including Vivaldi Gloria, R Vaughan Williams O be joyful in the Lord (The Hundredth Psalm); Fantasia on Christmas Carols, Adolphe Adam O Holy Night and a selection of Christmas music and carols.  We are delighted to continue to support this event and are very much looking forward to it!

The Exeter Bach Society was founded on 21 March 1995, the anniversary of J S Bach’s birth, at a meeting in The Guildhall, Exeter by Alderman Ramon Yeo, an accomplished organist and admirer of J S Bach’s many compositions.

Since its formation the Society has delved deep into J S Bach’s repertoire, hosting numerous performances of his cantatas, Lutheran masses and instrumental works. It’s choral performances over the past few years have included J S Bach’s Missa Brevis in F, Christmas Oratorio, St John Passion, St Matthew Passion, and his iconic Mass in B Minor. Major concerts and cantatas feature professional musicians and soloists from Devon and further afield.

The upcoming performance will see Stephen Tanner as conductor and Julian Rippon as Bariton.

This is set to be a wonderful concert for all in attendance!

Find out further information and book your tickets here 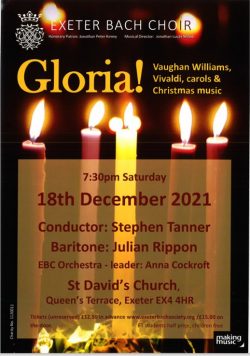