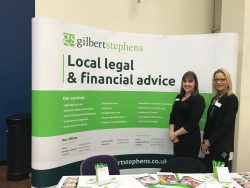 Potential young lawyers of the future have been receiving advice and inspiration from staff at the Exeter branch of Gilbert Stephens Solicitors, who represented the firm at Exeter School’s annual careers convention.

The law firm was among 43 organisations who attended the event on November 16th to share their professional experience and expertise, as the students are considering their future career paths and finding out about the qualifications and training they will need.

This year partner Kim McDonald and solicitor Rosy Holyer attended the convention, and also held a prize draw, with the winner getting the chance to shadow Kim in the Litigation department for a day.

Rosy said, “I particularly enjoy representing the firm at this event and the great opportunity to meet bright, aspiring and ambitious young people, and encourage and hopefully inspire them to consider pursuing a challenging yet extremely rewarding career in law.

“I remember attending a similar event myself at that stage of my life, and a conversation I had with a friendly solicitor representing a firm in Bristol had a huge impact in forging my interest in studying law. That led to my motivation and determination to become a lawyer, and so to think that perhaps one day I could have that same effect on a young student would be fantastic.

“The pupils were particularly interested in hearing what a day in the life of a lawyer actually involves. They were surprised to learn that we specialise and work in different areas of law, Kim working in Litigation and myself in Private Client for example, as well as the other areas such as Conveyancing, Commercial and Family dealt with by our colleagues.

“They were also keen to hear the variety of tasks we perform on a daily basis such as writing letters and emails, answering calls, drafting legal documents, and meeting and advising clients in person either in the office or, particularly in my area of Private Client work where many of my clients are elderly, going out to visit them in their own homes or residential care homes.

“They were also very interested in Kim’s area of Litigation and attending Court – which they thought sounded very exciting!”

Kim and Rosy were also able to advise the pupils on the A-level subjects that would be most useful if they were considering a career in law, and the academic qualifications and training required to become a solicitor.

Although Gilbert Stephens is not generally able to offer work experience, the prize draw to win a day shadowing Kim proved extremely popular.

Rosy said, “The interest generated from the draw just demonstrated the motivation and ambition of the pupils at the school, and we hope they and the parents we spoke to during the evening gained a better understanding of what we here at Gilbert Stephens do and what we have to offer.”

Among the many other professions and occupations featured at the careers convention were medicine, the media, science and engineering, the charity sector, finance and the armed services.

More than 300 pupils and families attended, and Exeter School’s careers advisor Ruth Cheesman thanked all the exhibitors for giving up their time to share their career journeys with the pupils.