Gilbert Stephens solicitors are proud to be able to support Exwick Villa by continuing with their sponsorship of a banner at the ground, providing funds and moral support for the team through next season.

In response to recent difficulties faced by all involved in football over these last 18 months, Gilbert Stephens are happy and excited that they can continue supporting Exwick Villa, a team with a long history within the local community.

Managing Partner Terry Bastyan stated: “We started this partnership in 2018 and it has been very rewarding seeing how much people have enjoyed being associated with such a long-standing club.”

Exwick Villa have existed since 1968 and play in the Devon & Exeter Football League.  Originally based at the Exwick ground and called Exeter Civil Service they were one of the most successful teams in the Exeter area whose players came from mainly a public sector service background.

After a challenging 2020/21 season thanks to the pandemic, the team looks forward to an exciting and hopefully more predictive 2021/22 season. There are some pre-season friendlies lined up which should help them get into game shape before they kick off their first match of the new season!

Terry added “We wish Exwick Villa every success for its upcoming season and look forward to following the squad to victory!” 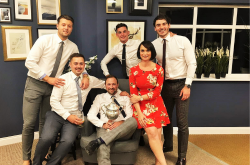 Marketing Manager Dana Mulligan pictured with the Exwick Villa team having won their league in 2019. Hoping for a successful season in 2020/21!