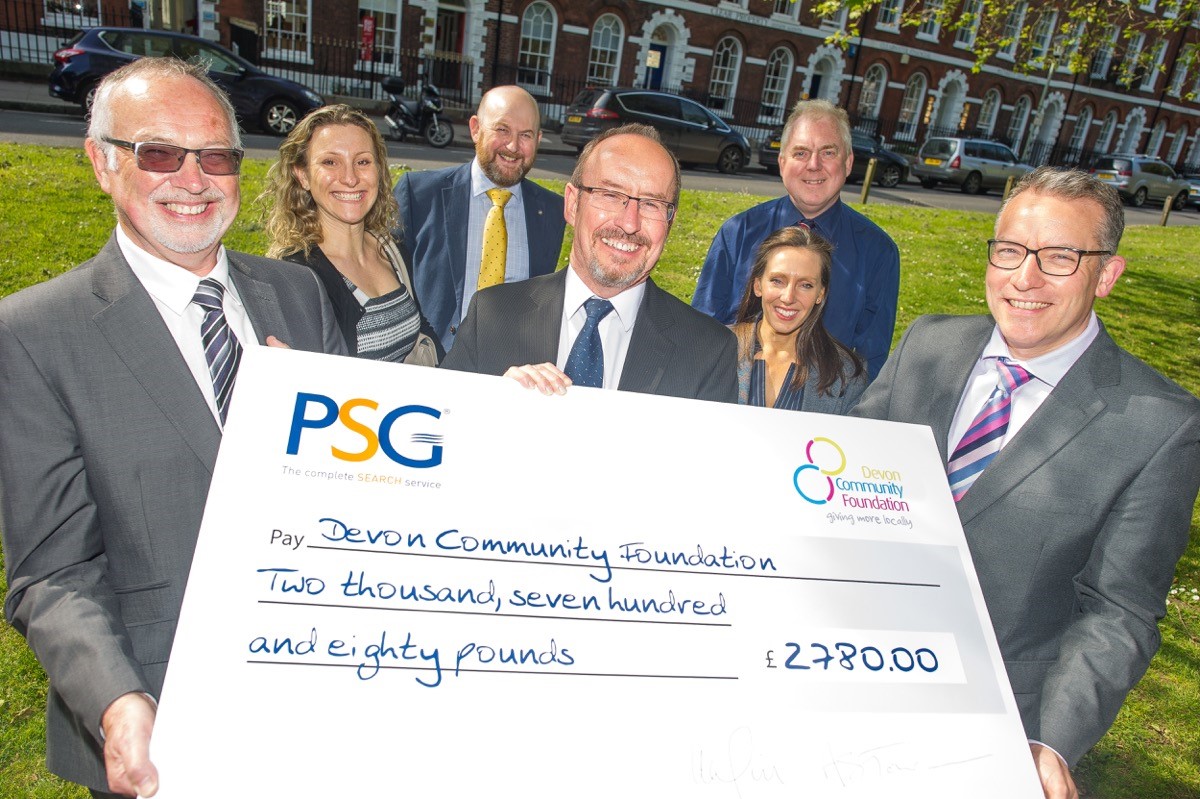 Members of Exeter‘s legal community gathered in Southernhay on 11th May 2017, for a charity cheque presentation, after raising over £2,500 for the creation of a permanent cultural tribute to the buildings that perished in last year’s Cathedral Yard fire.

Property Search Group came up with the idea of bringing together Exeter’s law firms to raise money for the Historic Exeter Fire Appeal, by commissioning and auctioning a painting of a day in the life of Southernhay, traditionally the city’s legal hub. The unique and quirky painting, created by Devon artist and illustrator Sara Nunan, features the city’s solicitors and barristers enjoying their hobbies and interests from surfing to singing and rugby to reading.

The painting was auctioned at the Mercure Exeter Southgate at the end of March, by TV’s Homes under the Hammer auctioneer Scott Gray, and won by 24-year-old Tom Backhouse, of TerraFirma, whose father Inspector Mark Backhouse was involved in the emergency response to the blaze.

The original painting was sold for £310, with an accompanying painting by Sara of Cathedral Yard selling for £320. The funds raised from the auction were combined with donations from the 13 law firms, for involvement in the painting, and the sale of limited edition prints, giving a final total of £2,780.

The Fire Appeal, administrated by Devon Community Foundation, has already raised over £20,000 and given grants to staff and small businesses affected by the fire. With the Fire Fund now coming to a close, the money raised by the Southernhay Life campaign will go towards the creation of a permanent cultural tribute, after a public vote run by the Foundation.

Scott Walker, of Devon Community Foundation, said: “The Southernhay Life campaign was a very fitting way to draw to a close the Exeter Historic Fire Appeal.

““I would like to thank PSG, the Exeter Legal community and the winning auction bidders for their generosity. The money raised will enable us to carry out the community’s wishes, to use the remaining money to create a permanent cultural tribute that recognises the historical importance of the buildings lost.

Andy Towers of PSG, which provides conveyancing search services to legal firms across the region, said: “We’re thrilled that so many of Exeter’s legal firms decided to come together to support the campaign and thank them for their generous donations. We are also grateful to Devon and Somerset Law Society for their support of the campaign.

Terry Bastyan, Managing Partner of Gilbert Stephens is delighted that the firm have been able to participate in this worthwhile initiative of the creation of a permanent cultural tribute to the buildings that perished in last year’s Cathedral Yard fire.