Gilbert Stephens Solicitors are proud to sponsor Semper Fidelis – Courage & Sacrifice 1918, a concert organised by ABF The Soldiers’ Charity. Taking place on the 16th June in Exeter Cathedral, the concert will commemorate the ‘Battle of Bois des Buttes’ on 27th May 1918. This battle took such a hard toll on the local Regiment, the 2nd Devons, who in recognition of their sacrifice and courage were awarded the ‘Croix de Guerre’. This means the concert and the inspiration behind it is particularly poignant for the local community.

The concert will feature a number of world-class musicians including the Exeter Symphony Orchestra and the Exeter Philharmonic Choir, and will also be attended by Lord Julian Fellowes, creator of Downton Abbey and the upcoming The Gilded Age.

Gilbert Stephens Solicitors understands the importance of this event and the charity behind it. ABF The Soldiers’ Charity is an organisation that gives vital support to soldiers and veterans from the British Army, making grants to individuals through their Regiments and Corps, and supporting a huge range of specialist charities both nationally and internationally.

Reflecting on the importance of the concerts, Terry Bastyan, a partner at Gilbert Stephens Solicitors, noted that “it is crucial that ABF The Soldiers’ Charity is supported and promoted in this way. The concert is an occasion that will not only commemorate the sacrifice of soldiers in 1918, but help provide a vital lifeline for soldiers and veterans today. We hope that people will give generously and enjoy the concert in the beautiful surroundings of Exeter Cathedral.”

The evening of music will begin at 7.30pm and tickets will start at just £10 each.

Full details of the concert, including a booking form, can be found here 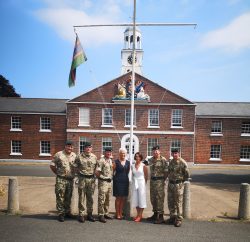